Misgebotten is a transmutation of “misbegotten”, meaning ill-advised, hair-brained, or poorly started. This odd name is attributed to a goose, whose ancestral origins were rather confused–misbegotten.  My grandparents loved to feed the geese at the Tobacco River near their home in Clare, MI.   A particular, odd-ball goose would return year after year.  I met him several times.  And he became so beloved that my grandparents’ dear friend Alan Maciag, an acclaimed plein air painter, captured him in a lovely painting.  My grandmother Bummie’s name for this goose was  Misgebotten, a sort of tangled German/American Malapropism that had a nice ring to it.  We’ve been referring to him with this moniker ever since.

Misgebotten recipes are not recipes for goose dishes.  They are the collection of odd-ball recipes that I’ve squirreled away in my little recipe box.  We all have a box like this:  a resting place of hand-me-down recipes from family and friends, clippings from food magazines that represent our projected self-images, that must-have office potluck recipe, strange collected recipes, our best intentions, amazing inspirations, and  weird diversions.

How else do I explain a recipe for candied diorama Easter eggs?  This came from an intense conversation with the mother of a good friend. The mother was a former Home-Ec teacher from Chagrin Falls, OH and she was undergoing chemotherapy for cancer.  She came out to visit her daughter Bev, a friend of mine in Arlington, VA at Easter.  During the visit, we t 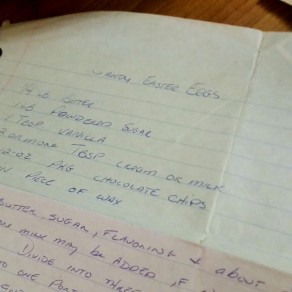 alked about Easter eggs, and I discovered that she knew how to make real, edible diorama eggs.  She sent me her recipe a week or so later.  A couple months later she passed away.  I have made her recipe only once, and my attempt was certainly not near her level of perfection, but it gave me a very personal glimpse into my friend’s wonderful family. Every time I look at that recipe I have an indelible image of Bev’s mom sitting at the picnic table telling me how to make the diorama eggs.  I’ve lost touch with Bev, but I have her mom’s recipe immortalized in my black recipe box that is adorned with a rooster.

There are many other recipes and memories in that box.  I am looking forward to going through the box and blogging about the experience.  Some are recipes that I clipped as a high school student, thinking that I would need to know how to make Swordfish Provencal at some point in the future.  (Well, you never know!)

Others are the useful recipes from my friends and college roommates, such as the ever popular Pam’s Mom’s Sunday Chicken.  This recipe was legendary not only for its tastiness but for the requisite skill of cutting up a whole fryer. My roommate Pam instructed us all in how to do this.  (And, I have to say it is one of the most useful culinary skills I have ever acquired.)  I recently revisited my recipe box to make dolmades, the recipe of which was passed on to me by a dear neighbor, Tammi, in 1985.

I’ve also saved the handwritten recipe cards from grandmothers and other relatives.  Looking at those recipe cards (even if I never again make a dip with MSG)  brings these loved ones closer and present.

When you physically keep a recipe–transcribed  on a card and secured in a box–you  preserve not only the formula for a dish that you enjoyed, but you commemorate an event or era or friendship.

The point is that even though the recipe may be irrelevant to your current culinary activities, it can still bring you joy through honoring a treasured memory of the person who gave you the recipe or recalling a precious moment in time. Misgebotten or not, the effect is the same.

This site uses Akismet to reduce spam. Learn how your comment data is processed.